The 6th Annual Bloomington Craft Beer Festival took place this past Saturday, April 9, 2016 at Historic Woolery Mill and, for the second year in a row, sold out to a crowd of 3,600+ people and featured breweries exclusively from across Indiana.

The event is one of three annual fundraisers for Brewers of Indiana Guild, the non-profit trade association that promotes and lobbies on behalf Indiana’s brewing industry.

Ticket sales support Guild efforts such as the new Drink Indiana Beer app–which features turn-by-turn directions and info for the state’s 120+ breweries–as well as the first official magazine guide to Indiana breweries, to be published in May.

“This festival is great not only because it supports local beer, but because it supports other local businesses and organizations in a classic Bloomington setting,” said Steve Llewellyn, Events Chair for Brewers of Indiana Guild and owner of Function Brewing. Llewellyn and his team brought 27 unique beers to the event.

The next opportunity to support Indiana brewers by attending a Guild festival is Saturday, July 30, 2016 at Historic Military Park in downtown Indianapolis. The third of the Guild’s annual festivals, Indiana Microbrewers Festival is presented by HopCat Broad Ripple and will feature 100 breweries, the majority from Indiana.

Take $5 off the #BtownBfest tee with coupon code BTOWNBFEST, while they last.

Features the Drink Indiana Beer logo in one color on the back. 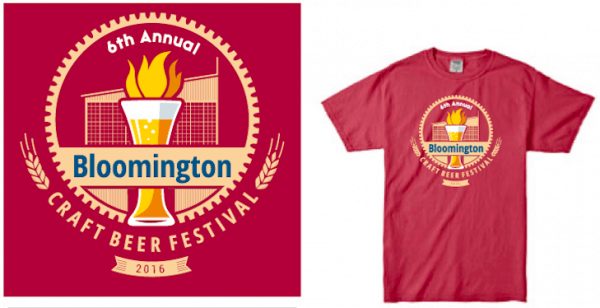 Cheers to our partners!

A wrap-up of the second annual Indiana Craft Brewers Conference and 2016 Brewers of Indiana Guild board elections
Why does “local” matter when it comes to craft beer and beer fests? Part 1: Economics