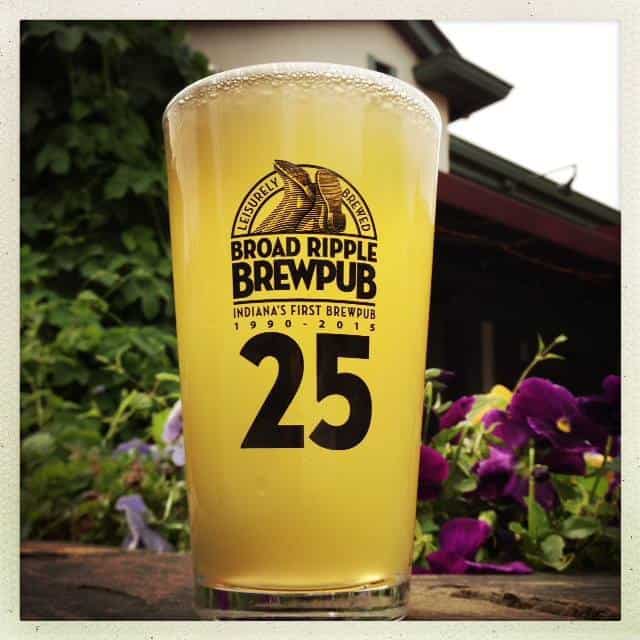 As Brewers of Indiana Guild‘s Communications Director, I typically don’t write in first person when I post about our beer festivals, Tomlinson Tap Room, and our other efforts to support Indiana’s brewers and rapidly growing craft brewing industry.

But for me and many others, Broad Ripple Brewpub is particularly special.

I won’t get into much of the history of John Hill and his Brewpub in this post–that’s all finely detailed in True Brew, a guide to Indiana craft beer by the Grand Dame of the subject, Rita Kohn. (Plus, if you see John sitting at the cozy wood bar that he built, he’d be happy to tell you all about it–and perhaps share a few bad jokes as well.)

Instead, I’ll summarize my experience with John and the Brewpub and touch on just some of the reasons why I’m going to love being at the party tomorrow. 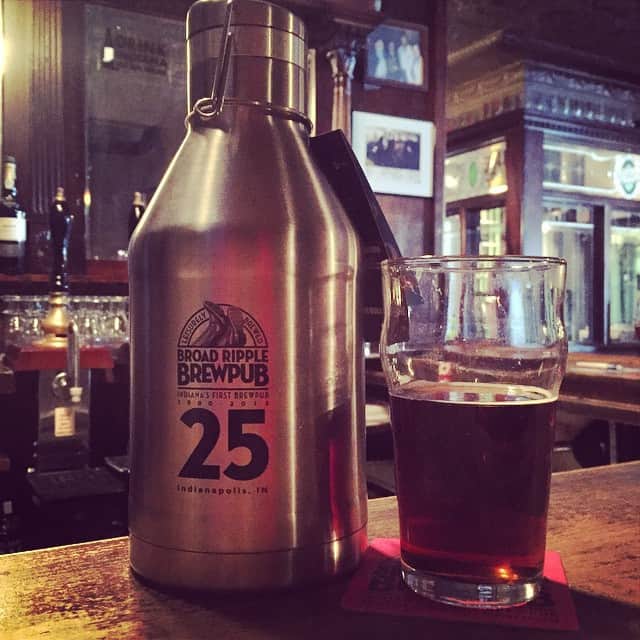 A limited edition Broad Ripple Brewpub 25th anniversary growler and (half of) an imperial pint.

I grew up in Greenwood on Indy’s south side, then went to school briefly in Colorado. Blue Moon was all the rage; my German-born Grandfather (or “Opa”) introduced me to German Hefeweizen years earlier, and, like many others, I was interested in the new American-made beer, which reminded me of the first beers I’d had from Germany.

I transferred to IU-Bloomington, where Upland Brewing Co. was just getting started. Their Upland Wheat, along with Bell’s Oberon, held similar flavor profiles for my developing palate, and because they were everywhere in Bloomington–and came with orange slices–I started drinking these local alternatives.

It wasn’t until some time later that I learned about what “craft beer” was, and why it’s important to drink local beer instead of the stuff that’s brewed by megabreweries (ahem, Blue Moon.)

Fast forward a few years. After living on Indy’s east side, I moved to Broad Ripple, just half a mile away from the Brewpub. I got a terrific job with Humane Society of Indianapolis (a.k.a. IndyHumane) doing basically the same thing for them that I now do for Brewers of Indiana Guild.

I started visiting the Brewpub for their discounted Monday Pint Nights, where I could get a refreshing 20 oz. imperial pint served in the traditional English style, with lower carbonation and slightly warmer than the frigid, hyper-carbonated conglomerate beer found at most restaurants.

John and his team hosted some of IndyHumane’s long-term-resident dogs at the Brewpub on nice evenings, where they could mingle with guests in the hopes of winning their hearts. (They still host pups at Move to Act‘s Tails & Ales.)

Around this time, I learned that the Indiana Microbrewers Festival that I’d attended for years was established by John, initially as a benefit for the Humane Society. Once Brewers of Indiana Guild was established–John was instrumental to its formation and served as its first President–the event became a fundraiser for the Guild (with a portion of proceeds going to the Leukemia and Lymphoma Society), along with Winterfest and Bloomington Craft Beer Festival years later (which also continue to benefit other non-profits).

During the five years or so that I lived in Broad Ripple, I grew to know and love John. Like many brewers, he has a gruff exterior but a heart of gold, which has benefited many. 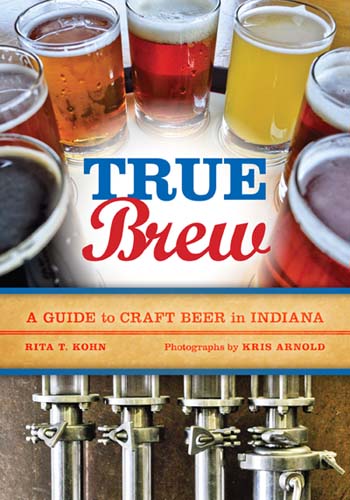 The beer is important. The fundraisers are important. But the most important aspect of the Brewpub, in my mind, is its sense of being a “third place” that has led the way for so many others: The Brewpub has become a hub for not only its neighborhood, but the brewing community in Indiana.

I met Rita Kohn at the Brewpub. When Rita’s aforementioned True Brew launched in 2010, the Brewpub hosted her book signing event in July. I bought a copy for my dad–a longtime home brewer and current volunteer at MashCraft in Greenwood–and talked with Rita. Expecting a beer-bellied young woman, I was surprised to learn that this diminutive, silver-haired lady was the author. She graciously chatted with me and signed the book.

Little did I know that shortly thereafter, I would work alongside her at NUVO as she wrote Beer Buzz, then a few years later–after having worked with another of Indiana’s longest-running breweries, Bloomington Brewing Co.–I would sit down with her for dinner at the Brewpub, propose the idea of an Indiana craft beer trail, and she would tell me, “You need to talk to Clay [Robinson, Sun King Brewing’s co-founder]. He’s the President of the Guild now.” 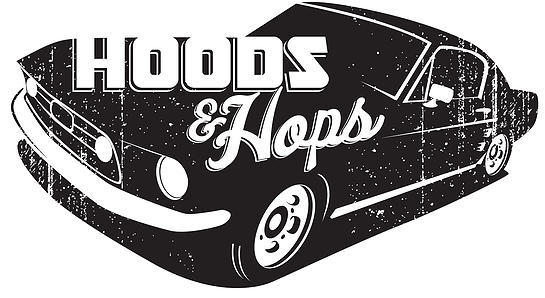 So I set up a meeting with Clay–whose large production brewery provides a striking counterpoint to the “brew it here, sell it here” neighborhood-focused Brewpub.

I’d known Clay since he started fast-growing Sun King, and I knew he was a busy guy, so in a 2-minute pitch, I presented my idea. He said, “That’s great. We can probably make that happen. And, by the way, we’re hiring for this new communications position.”

If it weren’t for my meeting John, then Rita, then Clay, I probably wouldn’t be typing this right now. 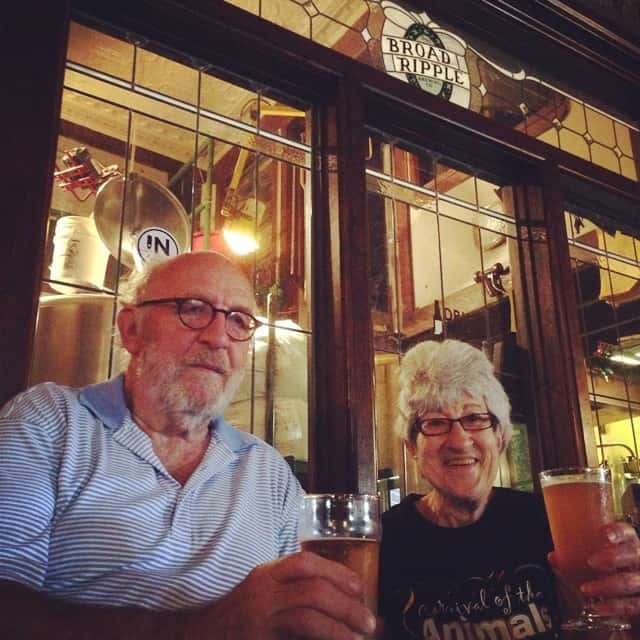 John Hill and Rita Kohn at Broad Ripple Brewpub. I took several photos and asked them to smile each time, and this is the biggest smile I could get out of John.

Though I lived in Indy for years before meeting John, it was at his brewery that I first felt a true sense of community in this rather large city.

Earlier I mentioned the idea of brewpubs as a “third place,” after work and home, where people can go to be with others, where they can share the news of the day, where they can socialize in a way that’s oh-so-important for us as human beings.

John and the Brewpub have provided that sense of “third place” for years–and inspired dozens of Indiana’s breweries to offer the same.

They’ve helped their community in other ways, too. Along with being instrumental in the establishment of the Guild and its events, they’ve held the Hoods & Hops Car Show for years, which benefits Broad Ripple Village Association; John and his wife, Nancy, have been key benefactors of the BRVA.

And, of course, John and his brewers have brewed delicious beer for years. 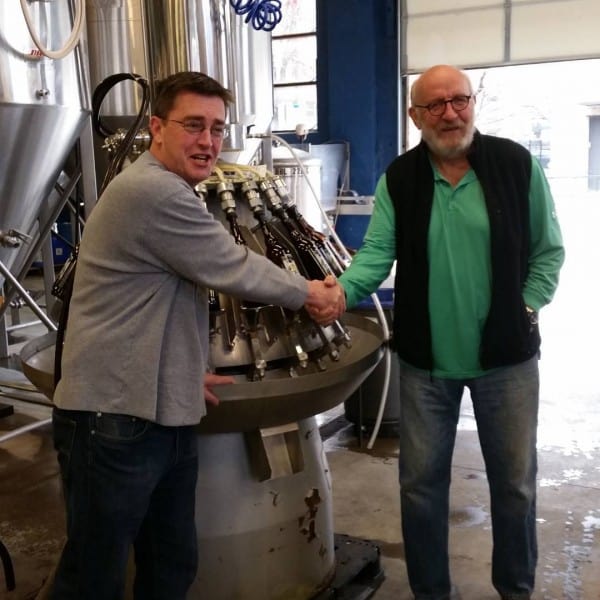 Without going into too much detail (in large part because Indianapolis Monthly, NUVO, and others have done it much better than I can here), John and the Brewpub have helped launch some stellar brewing careers.

Greg Emig, current Guild President, brewed for John and is owner of Lafayette Brewing Company, another of the state’s longest-running breweries. (You can meet Greg in the Cask Tent at Winterfest.)

Then there was Kevin Matalucci who founded Twenty Tap and its brewery, Twenty Below.

And John Treeter from Oaken Barrel, who is now there again.

Jonathon Mullens, formerly of Flat 12, is now the Brewpub’s brewer.

Mullens has been brewing Celebration Ale, a barleywine, and more significantly, the Brewpub’s first bottled beer. It will be available at tomorrow’s party.

Mullens has been busy–but so have all the others mentioned. The Brewpub posted this on their Facebook page last night:

“Brewers past are bringing us some amazing beers to pour for you: Greg Emig from Lafayette Brewing is bringing Funky Boris, a huge Barleywine that’s been maturing for 2 years! Ted Miller, Brugge Brasserie/Outliers is bringing us Mauvaise Chanton, which is Very Bad Kitty aged in a Cognac Barrel; Kevin Mattalucci, Twenty Tap/Twenty Below is bringing Love TKO, a Russian Imperial Stout; and John Treeter, Oaken Barrel, is bringing Superfly IPA, recently voted Indiana’s best IPA.” 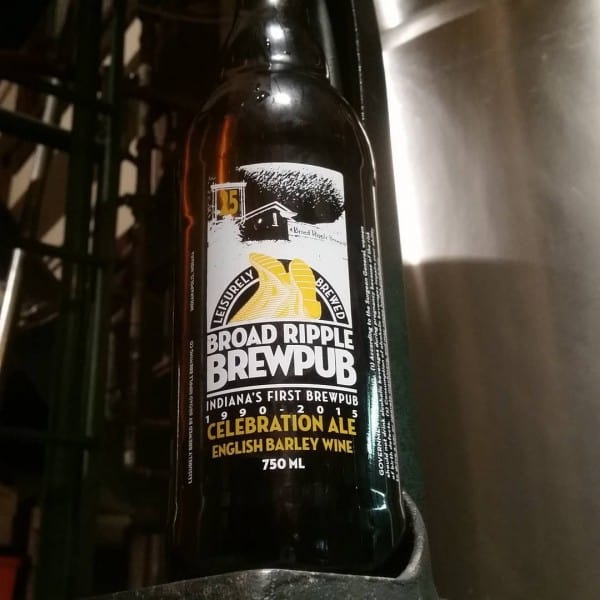 In case you need more reasons to come to the party and visit the Brewpub in the future, here are a few:

I hope craft beer lovers the state over will join us tomorrow to honor John and everything that he and the brewpub have done for Broad Ripple, Indianapolis, and Indiana’s craft brewing family.

On behalf of everyone whom you’ve helped and inspired, cheers, John. Here’s to 25 more years of Indiana’s first brewpub.