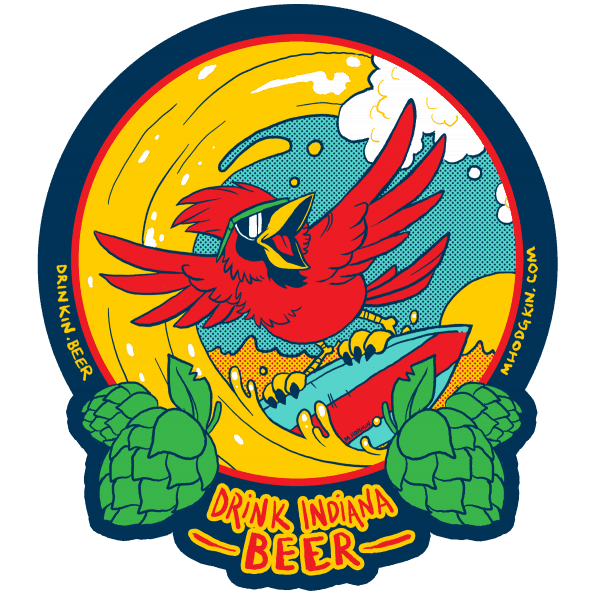 We’re excited to announce a new line of limited edition Drink Indiana Beer gear featuring local artists’ work and supporting the mission of the Brewers of Indiana Guild and other local nonprofits.

Visit the Drink Indiana Beer booth at the 22nd Annual Indiana Microbrewers Festival, the Brewers of Indiana Guild’s summer fundraiser, on Saturday, July 29 to get your “SurfIN’ Bird” tee, and learn more about Mallory in our interview, below. 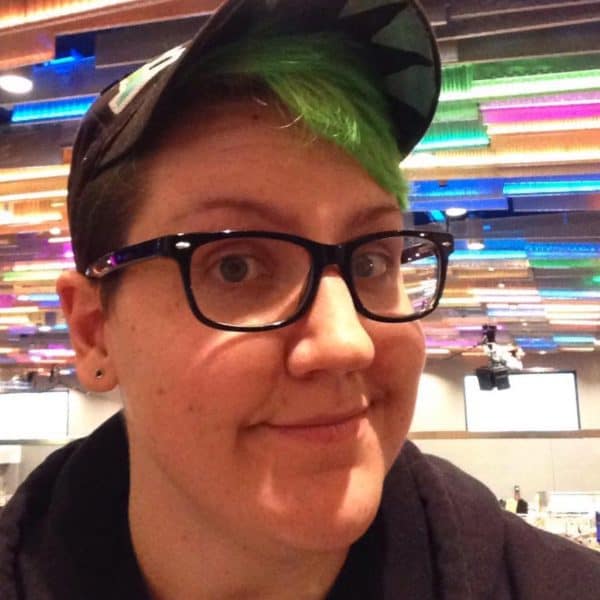 Brewers of Indiana Guild: What’s your background in the local art community, Mallory?

Mallory Hodgkin: I’ve been showing in local shows, including a few breweries and other small galleries, since I graduated college in 2009.

I’ve built my name up simply by showing as much as I possibly could and meanwhile designing posters and logos for a few shows.

Recently I’ve been getting more shirt designs under my belt after creating my own line of shirts.

Your art usually features animals of all sorts. How did you get into drawing and painting them?

I’ve always drawn and painted animals. Even when I was a little kid, that’s all I ever wanted to draw.

They’re my favorite because they have so much variation! I have a real love for caricature, and animals especially have so much to play upon.

What inspired your creation of “SurfIN‘ Bird”?

When I’m given free reign to make something, as I was generously given here, I tend to be drawn to those kinds of motifs and colors I saw so often when I was a kid, so a cardinal surfing on beer was a natural choice.

What are your favorite breweries? Do you ever “drink & draw”?

My favorite breweries in town are Fountain Square Brewing Co. and Indiana City Brewing Co. I’m not huge on most beer, but I’ve always found an option at these places, and I especially love New Day Craft, too!

And I do drink and draw: There’s a monthly invitational Craft Brew Doodle Crew that meets at Indiana City every third Thursday. Otherwise, my “drink & draws” tend to be spent at home.

How did your art being featured at Fountain Square Brewery come about?

The first time I exhibited there was through someone I’d exhibited with elsewhere, and from there it was easy to keep the people running the gallery at Fountain Square Brewery in mind when I was looking for places to show.

I’ve sold well there, and the folks running it are really great about showing great local work, especially when I was just starting out.

I haven’t shown at another brewery yet, but my paintings got booked for 2017 faster than I thought, and I haven’t been able to reach out. I’m looking to get more breweries under my belt for 2018!

Have you done any artwork for local breweries?

I have! My friend and killer local artist Amanda Keller and I collaborated on the poster design for Hop Your Face 2016 for Fountain Square Brewery. As of now, that’s the only work I’ve done for a brewery, but I’m hoping in the future I can get my name out there and work with breweries on label illustrations.

What’s your favorite thing about Indianapolis/Indiana?

I love that Indianapolis is a city that lets me experience an urban environment living downtown, especially with all the great locally focused events that go on just blocks from my home on the near northside.

On the other hand, I’m glad Indianapolis is small enough that it has local businesses and that small-town style of community and support that is so missing in larger cities. It really is the best of both worlds!

All that, plus since freelancing takes me all around the eastern half of the country, I’m very centrally located.