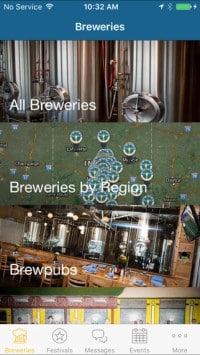 In an effort to increase the use of Indiana-grown ingredients in its members’ beers, we’ve created a program called “Bicentenni-Ale”–the name is a nod to Indiana’s 200th anniversary–which is focused on encouraging Indiana brewers to use ingredients sourced from Indiana. The project has been officially endorsed as a Bicentennial Legacy Project by the Indiana Bicentennial Commission.

We’re providing member breweries with a list of maltsters, hop growers, and other local ingredients providers and are encouraging our member breweries and Hoosier suppliers to connect and collaborate on Indiana-focused beers.

“We’re seeing commercial traffic in local malt and hops that didn’t exist even 5 years ago,” says Jeff Mease, owner of Bloomington Brewing Company (est. 1994)  and Chairman of the Guild’s Bicentennial Committee. “Indiana-grown fruits have lots of potential as inputs, too: At BBC we are in our third year of brewing a seasonal Persimmon Ale, and it gets more popular every year.”

The app, available for both iOS and Android through the App Store and Google Play, respectively, offers turn-by-turn directions to all of Indiana’s breweries, as well as info on events like the sold-out 8th Annual Winterfest this Saturday at the State Fairgrounds, which will feature more than 85 Indiana breweries.

Brewers of Indiana Guild will also release its first annual Indiana beer guide in a magazine format this May.

“Indiana’s brewing industry has grown rapidly, and it’s our mission to help promote our brewers and give them access to resources to continue to brew and sell great beer,” said Rob Caputo, Executive Director of Brewers of Indiana Guild. “We’re excited about growing and adapting with the industry.”

Indiana’s brewing industry had an economic impact of more than $1 billion in 2014 and employed nearly 8,000 people full-time, according to the national Brewers Association.