One of three annual fundraisers for Brewers of Indiana Guild–the non-profit trade association that represents Indiana’s brewing community–the beer fest featured more than 85 Indiana breweries (the most ever), hundreds of guests, and lots of fun.

Beer lovers sampled ultra-rare brews in the Cask Tent outside, got their pictures taken on the centennial Indy Car, and played giant Jenga at the Quaff ON! Sprinter station.

Huge thanks to our friends at HopCat–who handed out free Crack Fries cards and smartphone-sensitive gloves–for being our Premier Partner.

And big thanks to all of the other great sponsors who helped make the event a sold-out success for the second year in a row. (Interested in sponsoring some of Indiana’s best beer festivals? Find sponsorship info here.)

More people than ever enjoyed Winterfest this year, and we recognize and take responsibility for the fact that some people had difficulty getting in, lines were long, we needed more beer and tasting glasses, and glass samplers at an event based on concrete may not have been the best decision.

Rest assured that we take pride in holding some of the best beer fests in the Midwest and we want to ensure that they’re fun and safe for all involved. Look for improvements to Winterfest next year based on the feedback we’ve received.

In the meantime, we appreciate your support of Indiana’s breweries and hope you join us at Bloomington Craft Beer Festival on Saturday, April 9, 2016 when we return to Historic Woolery Mill.

#BtownBfest sold out last year and featured only Indiana breweries for the first time ever, so expect the same this time around. 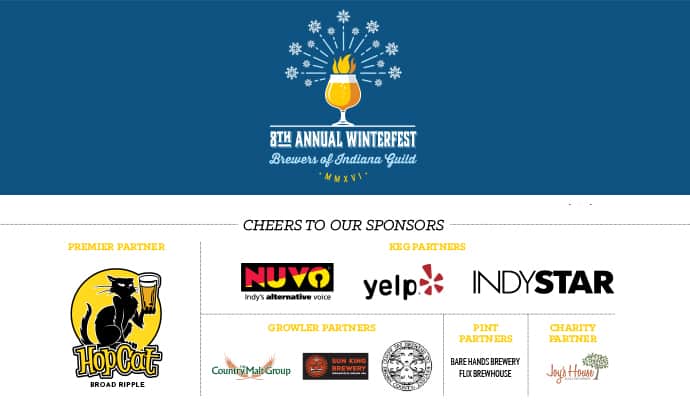