With more than 100 craft breweries open in Indiana, there’s a lot of terrific beer flowing through our great state. How can you keep up with it all?

One of the easiest ways is to check out the interactive drinkIN.beer map of Indiana breweries, which lists the majority of breweries in the state. While not all are open to the public, you can visit most to enjoy a pint or get a growler to go (even on Sundays!)

One of the newest and most exciting ways to discover Indiana craft breweries is by touring Indiana’s craft beer trails. 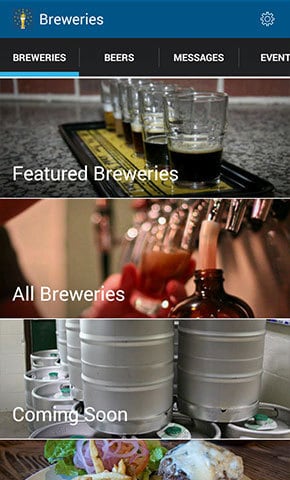 The app features beer lists, events, and messaging so you can find out about the latest beer releases and specials.

Grab your copy of the Bloomington Ale Trail passport, have it stamped at each of B-town’s breweries, and redeem it to get a sweet prize. Currently, you’ll fetch an Ale Trail pint glass.

The newest on the scene, the Evansville Craft Beer Trail has launched with six participating beer-centric locations. Get a stamp at each and receive a prize. Even more exciting? Complete the trail 10 times and get a chance to brew with one of Evansville’s brewers.

Central Indiana and Beyond

Brewers of Indiana Guild is working with Indy-area brewers to launch the Central Indiana Craft Beer Trail, and breweries in other parts of the state are also working together and with tourism agencies to launch regional trails.

The Guild is also working on some exciting initiatives that will highlight breweries and trails across the state.

Nearly all breweries in Indiana are members of Brewers of Indiana Guild; you can show your support for the craft brewing industry in Indiana not only by visiting the breweries, but also by signing up for our monthly IN Brew News email and attending our three annual festivals: Winterfest, Bloomington Craft Beer Festival, and Indiana Microbrewers Festival.