Home » News » Why does “local” matter when it comes to craft beer and beer fests? Part 2: Community 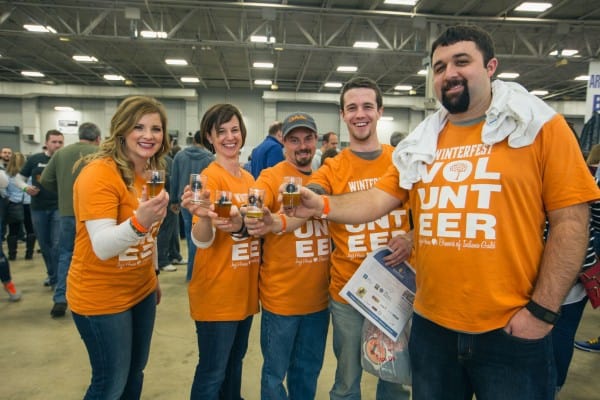 Volunteers from Joy’s House Adult Day Service celebrate at Winterfest earlier this year in Indianapolis. A portion of proceeds from ticket sales and tips from coat check benefited the non-profit, which provides physical, mental, and financial relief for families caring for a loved one.

During American Craft Beer Week, we looked at the economic reasons to support local breweries and beer festivals. In the second of the three-part series, we’ll consider aspects related to community.

You may have heard of Ray Oldenburg’s concept of “third places,” those which “host the regular, voluntary, informal, and happily anticipated gatherings of individuals beyond the realms of home and work.”

Nearly 2/3 of Hoosier breweries are brewpubs–the epitome of Oldenburg’s “third place.” (For a full list of brewpubs–breweries that also function as full-service restaurants–check out the Drink Indiana Beer app for those closest to you.)

These are places where, in addition to beer direct from the source, you can enjoy local food, artwork, music, events, and much more.

Locally owned brewpubs are places to hang out with family, meet new friends, and talk with the brewers about the beer you’re drinking.

I’ve written about this sense of community in the Indiana brewing industry before. Since then, I’ve talked with many people, both in and outside of the brewing industry, about why it matters for our communities.

I was recently in a conversation with several industry folks, including Rob Caputo, cofounder of Flat12 Bierwerks and Interim Executive Director of the Guild. When asked why he thought Indiana’s beer scene was any different than other states’, he pointed out that in the 25 years since Broad Ripple Brewpub–the state’s oldest “microbrewery,” to use the parlance of the time–was founded, the industry has grown rapidly thanks in large part to small, community-focused brewpubs.

In fact, the brewers and breweries that have branched off from the much-loved Brewpub (the abbreviated name given to Broad Ripple Brewpub by those who know and love it) is substantial enough to have warranted several versions of “brewery family trees” in various publications.

I used to live half a mile from the Brewpub, and consequently visited it religiously. Now I live not much farther from Fountain Square Brewing Company, Chilly Water, and Metazoa.

According to the BA, more than 75 percent of legal drinking adults live within 10 miles of a brewery in America, and those breweries hosted an estimated 10 million people in 2014. While we at Brewers of Indiana Guild don’t have an estimate of the number of Hoosiers who visit their local breweries, we’re working on such statistics and can safely assume that the number is significant.

We do know that attendance at the Guild’s three annual festivals is more than 17,000 people–and the majority are people who genuinely care about their local breweries.

In the same way that many of these people would rather shop for food at a farmers market than Wal-Mart, they’re choosing to purchase local beer and attend local festivals when possible instead of supporting the aging macro industry.

Attending local events has numerous benefits, all of which should be considered when you’re choosing which of seemingly countless beer fests to attend:

Speaking of charity, local brewers love giving back: In 2014, craft breweries’ charitable giving across the country was more than $71 million.

The final part of this series will consider a third important reason to support local: You! Stay tuned.