Attend the beer fest–which features 85 Hoosier breweries–and be among the first to enlist in the IN Beer Brigade. As an IN Beer Brigadier, you’ll receive access to limited edition collaboration beers brewed by Hoosier brewers, a ticket to a beer-focused party (locations around the state to be announced soon), members-only glassware, a digital membership card for use in Apple Pay and Google Wallet, and more.

In the inaugural year of the program, you’ll be able to enjoy the first Brigadier beer, a malted-corn-based IPA being brewed and bottled by world-reknowned 3 Floyds Brewing Co. in collaboration with more than 20 other breweries from across Northwest Indiana.

Join the IN Beer Brigade at Indiana Microbrewers Festival and you’ll receive an exclusive tee-shirt and more, including a die-cast bottle Drink Indiana Beer opener that will be free only to Brigadiers and only at the festival. 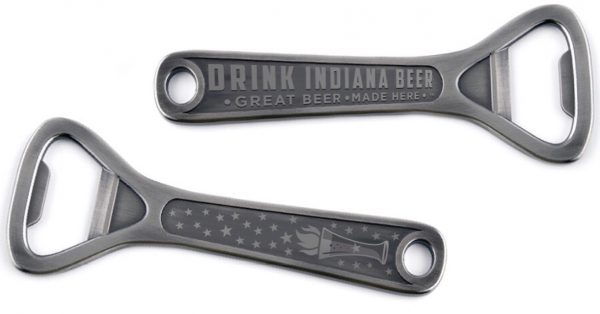 You will also be able to opt in to a premium level of membership to receive two 22 oz. bottles of the limited edition beer at the regional events this fall.

Sign up for a two- or three-year membership to receive a multi-year discount. Sun King Brewing in Indianapolis will host Central Indiana breweries for the brewing of a to-be-determined beer in 2017, and Bloomington-based Upland Brewing Company will brew a sour beer in collaboration with South Central Indiana brewers in 2018.

The IN Beer Brigade is the only program of its kind in the nation. Business affiliate members (like bottling companies and ingredients providers) will assist each year in everything from brewing to branding and packaging.

Brigadiers will directly support Indiana’s fast-growing brewing industry and the mission of the Guild, which is tasked with defending and assisting the 125+ breweries across the state.

If you can’t attend Indiana Microbrewers Festival, you’ll be able to join the program for a limited time online at www.drinkIN.beer beginning August 1.

In addition to Hoosier breweries, Indiana Microbrewers Festival will also feature cider, mead, and wine from across Indiana, as well as beer from a dozen guest breweries from out of state.

While Brewers of Indiana Guild festivals–including Bloomington Craft Beer Festival and Winterfest–are crucial fundraisers for the Guild, a portion of proceeds are donated to local charities. We donated $42,500 to charities in 2015, including our charity partner for the July 30 festival, Leukemia & Lymphoma Society.

The 21st Annual Indiana Microbrewers Festival is presented by HopCat Broad Ripple. Tickets, breweries, and much more can be found at indianabeerfest.comand in the Drink Indiana Beer app, which features turn-by-turn directions and contact info for all of the state’s breweries.

Available at Indiana Microbrewers Festival on July 30, then online at drinkIN.beer beginning August 1 for a limited time.

Everything included in the Annual Membership, plus two complimentary 22 oz. bombers of the exclusive North West collaboration beer brewed at 3 Floyds*, available only at the private IN Beer Brigade party in October 2016

Everything included in the 1 year Premium Membership, plus the complimentary 2017 Central collaboration beer to be brewed at Sun King (style and quantity to be determined) and released at a private party in 2017

Everything included in the 2 year Premium Membership, plus the complimentary 2018 South Central collaboration sour beer to be brewed at Upland (quantity to be determined) and released at a private party in 2018

*IN Beer Brigade membership is available for people ages 21+ only. Membership is non-refundable and non-transferable. Membership may be revoked at any time for any reason. Members-only event details coming soon. Tickets to private events will be sent separately. Packaged premium membership beers are available only at release parties. 21+ proxies may attend release parties for members who cannot attend. Government IDs will be checked and digital membership cards will be scanned at all events.